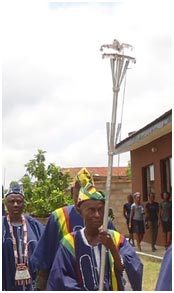 The academic dress of the Ifa Heritage Institute is created from aso oke woven by weavers in Oyo and Ilorin. The cotton fabric is dyed in indigo (very dark blue), which used to be the Yoruba national color.

The stripes in the middle of each dress are dyed in maroon, yellow and green, which are the three colors of Ifa. Green represents youth, vitality and nature. Maroon represents the blood of life and ìlèpa. Ìlèpa is the red earth inside which dead people are buried. When Yoruba people dig graves for their deceased loved ones, they usually would not stop digging until they reach this layer of red earth deep in the ground.

Yellow represents the wisdom of Ifa and old age. It is also one of the two prominent colors of Òsun, the first wife of Ifa. In Africa, Ifa diviners both male and female make use of green and maroon, especially for their beads, such as necklaces, bracelets, walking sticks, shoes and crowns, while the Diaspora makes use of green and yellow. 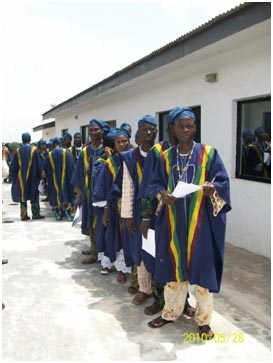 The faculty of the Ifa Heritage Institute deliberately chose an academic dress different from the one used by tertiary institutions in Nigeria, and which is borrowed from European academic and church regalia. Since the Ifa Heritage Institute is the first higher education institution in Africa that is based on indigenous knowledge and which makes use of the Yoruba language as its medium of instruction, we thought it fit that our academic dress should portray this important philosophy.

The design of our academic dress is a brain-child of the President, Professor Wande Abimbola. The tailor who sewed the dress and the cap is Mr. Osunbaroye of Oyo Town. All of the embroidery was done by hand.

The Institute mace is fashioned after Òsùn Jàngànnà, which is the authority of important priests of Ifa. It is considered to be an Òrìsà in its own right. In the Ifa tradition, Òsùn must never lie on its side on the ground; it must always be found standing erect.

This is our school logo, drawn by a local artist. The images are symbolic to Ifa and the divination system which the Ifa Heritage Institute was commissioned to safeguard. There is a representation of an Opon Ifa, sacred divining board, which always has an image of Èsù on top facing the diviner, as seen here. Èsù is like the policeman of the spiritual world who reports daily to the high god, Olodumare. He is involved in all Yoruba spiritual work , and despite Christian colonial efforts to characterize him as the devil, he is in fact a benevolent force in the world. Esu is shown here in the same way that he appears on all divining boards, facing the Ifa priest. The animals depicted on the Opon Ifa have been selected because of their relevance to Ifa and their presence on divining boards generally. Ifa is the original environmentalist, and it is clear in the literature that trees, rivers, mountains, birds, animals, humans and all other natural phenomena are considered not only sacred but equal. Ifa provides an ancient example of how the spiritual world and the natural world are inextricably linked.

After the sacred palm nuts are cast in a special way that yields one of 256 possible arrangement of marks in which the body of literature to be chanted is found, the sacred marks of Ifa are written in the middle of the board on a powder called iyerosun, which is the by-product of termite consumption of a particular tree in Yorubaland. Next to our school name, inside the Opon Ifa, you will see a divining chain, another instrument of Ifá divination. In the bottom center of the Opon Ifa, you will see Iróké, which is the staff of office of an Iyanifa or Babalawo (female or male Ifa priest). Our school motto, “Ifa Will Mend Our Broken World” is used among people around the world who are involved in Yoruba religion and culture. The phrase was coined by our President in his 1997 book of the same title.